To say that New Zealander Graeme Crosby's arrival on the UK racing scene in the late 1970s caused a sensation would be something of an understatement.

Kiwi ‘Croz’ was a star-in-the-making throughout Australasia in the late 1970s, riding for the Australian Yoshimura importer Ross Hannan. His obvious potential and promise brought him to the attention of Mamoru Moriwaki, who had founded Moriwaki Engineering in Suzuka earlier that decade. Moriwaki was married to Hideo ‘Pops’ Yoshimura’s daughter and – in the same vein as his famous father-in-law – started out his career by developing tuning parts for the new Kawasaki Z1 superbike. When Pops switched his allegiances and began to fly the flag for Suzuki in 1978, his departure paved the way for Moriwaki to step into the big shoes he left behind – establishing himself as the pre-eminent tuner of the big Kawasakis.

Graeme Crosby’s first ride for Moriwaki was at the 1978 Suzuka 8-Hours Race, the most prestigious on the annual Japanese calendar. Years later, the legendary Kiwi rider would recall his debut on the Moriwaki Kawasaki – the bike you see before you – for Classic Racer magazine:

“'I could not believe how fast and stable it was. First time out I was two seconds under the lap record. The bike was a real cracker. Tony Hatton and I then rode the bike in the 1978 Suzuka eight-hour race and finished in third position, despite Tony running out of gas and having to push it back to the pit area. We had a ball. The bike formed the building block for my attack on the UK racing scene in '79 and I stuck a similar one on pole for the Suzuka race in that year too.”

When Croz made his way to the UK, it hadn’t been with the intention to contest a full season of the British TT F1 Championship in mind. In fact, he’d headed overshore with competing in the Isle of Man TT at the top of his agenda. Either side, he planned to tackle the Brands Hatch on 27 May and finish his stint with Mallory Park on 10 June.

(Newbies are expected to do the Manx Grand Prix before trying their hand in the TT; a letter written on Crosby’s behalf by the famed rider Mike Hailwood scored him a direct entry into the main event.)

After the 1978 Suzuka 8-Hours Race, Crosby’s bike finished with a cracked frame, allowing Moriwaki to realise a long-held ambition to design and build his own chassis. His design used lightweight tubing and additional strengthening at key areas, as well as altered steering geometry. Armed with his new-and-improved machine, Crosby lined up on the grid at Brands Hatch. He’d raced there once before, in 1978, but it was this year that he would finish in an undoubtedly stunning second place, eventually being just pipped by Ron Haslam’s works Honda after leading for a couple of laps. In his autobiography, Croz, Larrikin Biker, he wrote, “The sight of my blue and yellow, standard-looking Moriwaki Kawasaki Z1 with its "sit-up-and-beg" high handlebars created a lot of attention. As a consequence of my unexpected second placing, I had apparently surprised the fans and the establishment and, if the truth be known, probably myself too.”

His Isle of Man debut was equally astonishing. The talented Kiwi brought his Moriwaki Kawasaki home in fourth place in the Formula 1 race, clocking in with an average speed of 107.39m/ph. A string of bad luck would strike, however, with his bike dying courtesy of a holed piston during the Classic TT. He fared no better in his Mallory Park outing; a spent gearbox meant he racked up a disappointing ‘DNF’.

Crosby and his eye-catching bike were firm fan favourites at these, and successive, events. With two more second places in the TT F1 Championship, pole position and a ‘DNF’ in the Suzuka 8-Hours, and Oran Park in Australia (where he came first), it was back to the United Kingdom for the Silverstone Round on 12 August. His next race was the Ulster Grand Prix, the second event in the two-round TT Formula 1 World Championship, and his third-place finish on the Moriwaki Kawasaki – along with his fourth at the TT – meant he earned third place overall in the 1979 World Championship.

Crosby continued to race the bike to plenty of acclaim and success, including his winning the one-off ‘British versus the Rest’ race that pitted TT F1 bikes against American-style superbikes. He then handed the Moriwaki over to its new owner, successful dealer Gordon Pantall. Pantall didn’t race the bike again, but did take its engine to placed in an F1 bike. In 1981, the engine and Moriwaki Kawasaki were reunited and the bike was kept on display in Pantall’s shop until 1987. Following this, the bike was dismantled and its parts stored. However, in 2006, the decision was made to restore it to its former glory.

The frame, swinging arm, and engine covers were powder coated and new Morris magnesium wheels were fitted (the same as the originals), while the Kayaba shock absorbers were reconditioned. Other minor cosmetic fixes were made, including redoing the signwriting – which was carried out by the same craftsman who had originally done it, back in 1979. Original Moriwaki pistons couldn’t be sourced and a new Dyna ignition was fitted, the original having worn out.

The restoration of the Moriwaki Kawasaki was finished in time for the TT Centenary in 2007, and emerged in the livery and race numbers it wore when Crosby last rode it back in 1979. Pantall rode it for the 2007 TT Lap of Honour, and the following year the man himself Croz rode it at Donington Park for the circuit’s 30th anniversary celebrations.

When purchased, the Moriwaki Kawasaki was presented in perfect working order and excellent cosmetic condition: a fitting end for one of the most spectacular, astonishing, and ground-breaking racing motorcycles in modern memory. 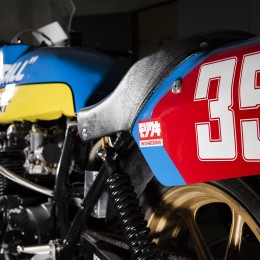 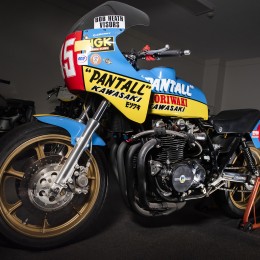 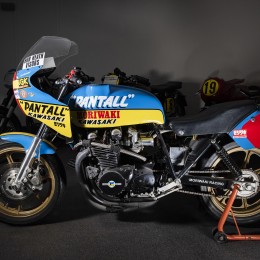 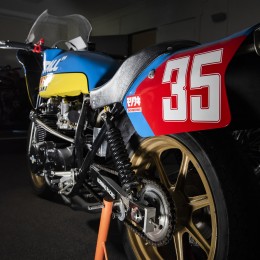 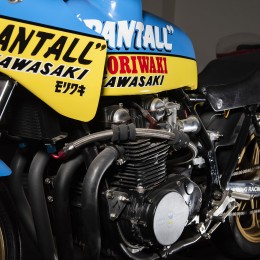 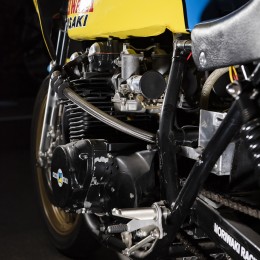 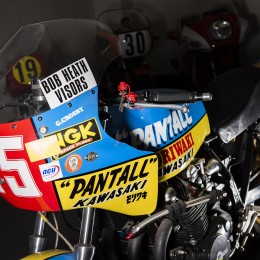 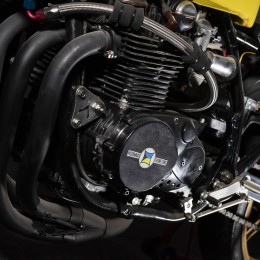 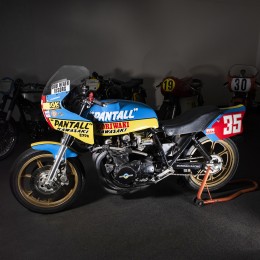