Italy: it’s long been considered one of the world capitals for style, flair and pizazz. And arguably it’s most famous motorcycle marque, Ducati, is no exception.

The collection here at Classic Motorcycle Mecca is home to a sensational 1988 Ducati Super Sports bike. For the newly-launched World Superbike Championship in 1988, the homologation rules required Ducati to manufacture at least 200 of its 851 superbikes. Records suggest the company produced 207 of the first series modified with a competition kit, which upgraded performance over the production Strada that was to follow. The kit included higher-compression pistons, bigger valves, race cams, twin injectors and 17-inch Marvic magnesium wheels fitted with slick tyres.

About six months after the homologation series was released, the Ducati factory marketed a kit that included 94mm diameter pistons and barrels that took capacity to 888cc, and grunty specs like injector trumpets, a lightweight flywheel, a race ECU, a new wiring loom, and larger valves.  Both the homologated and Strada models sported the distinctive red, white and green tricolore of the Italian flag.

This example is number 177 of the homologation series and was purchased new for the substantial sum of NZ$30,000 by NZ Classic Motorcycles staff member, Steven Scullion. Steven purchased the after-market kit, modified the exhaust system as per the factory drawings and added a brace to the swinging arm. With this bike, he won the New Zealand BEARS and NZACU Road Racing Championship in 1988/89 and at a speed event on a closed section of the Foxton straight he was clocked at 166mph (267kph). Steven says that this bike broke him, physically, mentally and financially.

It’s not often you get the chance to see grunty, glamorous motorcycles like this up close: you’ll be in for a treat next time you visit Classic Motorcycle Mecca. 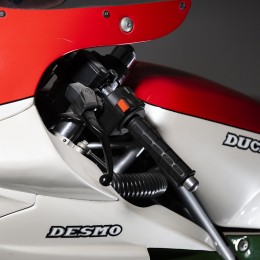 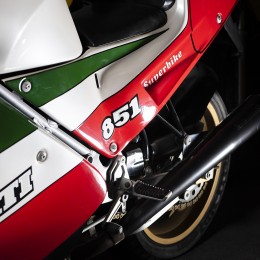 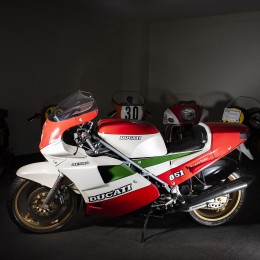 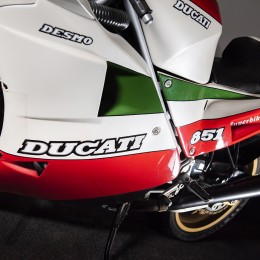 “For the motorcycle fan, this is the best collection I have ever seen.”