This is the bike that started it all.

Classic Motorcycle Mecca opened in Invercargill in mid-2016, but the collection started its life several years before further north, in Nelson.

Ex-pat American businessman Tom Sturgess began his love of collecting classic motorcycles with this 1965 Triumph Tiger Cub – hawk-eyed visitors to Classic Motorcycle Mecca will notice its placard humbly denotes that it is bike number one in our collection.

This 1965 Triumph Tiger Cub motorcycle is a T20SM Mountain Cub, as the model was known in the United States. Our history of the bike notes that it was dispatched to Johnson Motors, in Pasadena, California, back in August 1964. It was then bought by an enthusiast from Blenheim (near Nelson) as a box of parts in the early 2000s, before being restored in Christchurch. The completed bike was then registered for road use in 2005, before it was spotted by Nelson motorcycle museum owner Tom Sturgess in 2008. 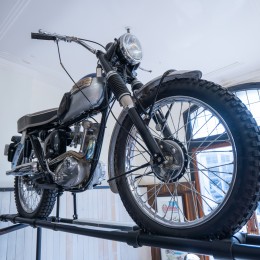