Designed by influential British motorcycle designer Bert Hopwood (you’ll see his hand on models produced by names such as Ariel, Norton, and Triumph – under Edward Turner, Hopwood was also involved in the development of the Triumph Speed Twin – as well as BSA), the Golden Flash was the first model in the BSA A10 series.

Though it was also available in black and chrome, it was the distinctive golden paint scheme as seen on the 1958 BSA found here at Classic Motorcycle Mecca that inspired the model’s snazzy name.

(The decision to offer the bike in such an eye-catching shade proved a great marketing strategy, with the bike outselling both Triumph’s Speed Twin and 6T Thunderbird.)

A staggering 80 percent of the BSA A10 Golden Flash motorcycles were destined for the United States’ market – which resulted in significant waiting times for British enthusiasts. The Brits were also only offered the model in its black colour scheme.

The Golden Flash certainly lived up to its name: not only in its paintwork, but in its speed. The bike clocked in at more than 160 kph (100 mph) in tests in 1950 and could cover a standing quarter mile in under 16 seconds.

The base model BSA A10 Golden Flash remained in production until 1961. 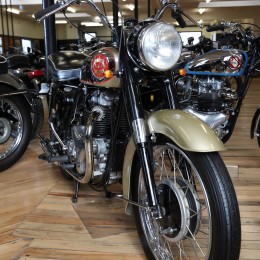 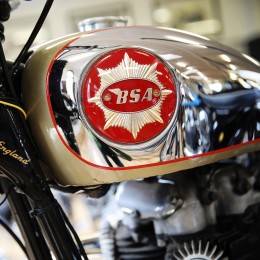