One of the bikes that made Springfield, Massachusetts-based manufacturer Indian a virtual household name, the Indian Camel Back was given its name for an obvious reason – the distinct shape of its fuel tank.

If you haven’t already checked out the profile on our 1907 Indian Camel Back model, have a read – and then pop back here to see how, in a single year, the model advanced.

First introduced all the way back in 1901, the Indian was a chain-driven machine that was powered by a single-cylinder, “F-Head”, 260cc motor. It formed part of what is known in motorcycling circles as the “diamond frame”, and the engine was sloped towards the rear to act as part of the seat tube, and represented innovative design and engineering from day dot. It proved wildly successful and was produced, largely without any changes, until about 1906. At this point, a sprung front fork and twist-grip throttle and ignition were introduced in a nod to modern conveniences of the time.

In 1907, Indian tweaked the design of the engine and the following year replaced the unreliable battery-powered ignition with a superior Bosch magneto.

Top speed of the 1908 Indian Camel Back was estimated to be in excess of 97kph – or 60mph. Its engineering, capabilities and design all made it a huge success for Indian, and by 1908 Indian was producing more than 3000 motorcycles a year: having made about 15,000 since their debut only a mere seven years earlier in 1901. 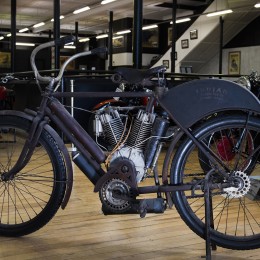 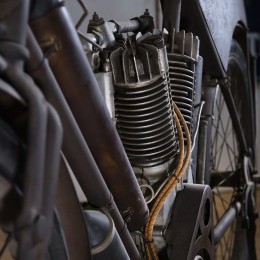 “An absolutely extraordinary collection of mostly classic and vintage motorcycles, most restored to pristine condition. My personal favourite is the Britten bike, a magnificent machine with an unbelievable story.”